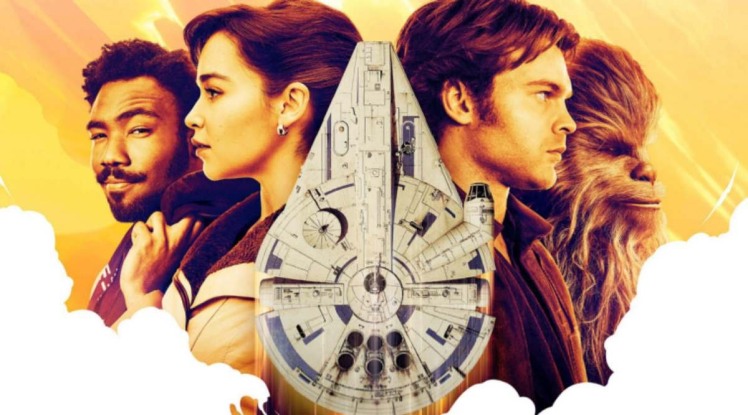 While I was initially reluctant… No. That’s not the right word.

While I was initially apathetic toward Solo: A Star Wars Story, within hours of the first showing I started hearing that it was actually pretty good. Of all my kids, my Bookends (oldest and youngest) most share in my fandoms. Once they caught wind that it was much better than expected, I knew we had to go. Honestly, my youngest had no reservations. The fact that it’s a Star Wars film was enough for him. Perhaps that unweildy subtitle was a better idea than I first thought! My eldest was more trepidatious. He’s old enough to know that the franchise has been getting some heavy criticism and that multiple directorial changes usually results in a very uneven film at best.

We dutifully paid for our tickets, got our drinks, candy and popcorn, took our seats, and silenced our cell phones.

The first return of anxiety came when I saw text on the screen. Notoriously, Rogue One ditched the Star Wars opening crawl altogether and just dropped us into the film. The thing that gave me pause was that we were treated to three Powerpoint slides of text instead of the crawl. I mean… why? Just. Why?? You went that far. Just give fans their crawl already. 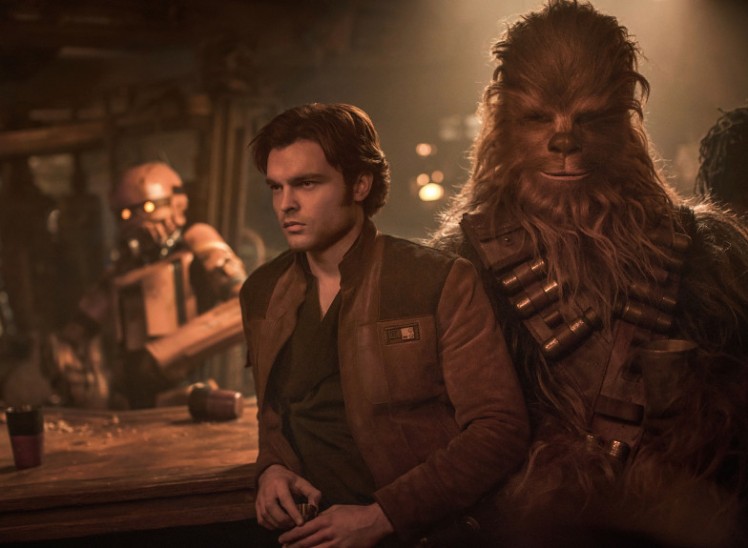 Despite these misgivings, the movie was pretty good. No, that wasn’t Harrison Ford and sometimes Alden Ehrenreich’s performance was a little uneven. Still, there was enough of Han’s inflections and mannerisms to get the character across… especially when he was standing next to the walking carpet. The rest of the cast was great. Emilia Clarke, Donald Glover, and Jon Favreau (as the voice of Rio) were stand outs. According to my kids, the film was a tad slow in places. As for me, I felt that Solo hit all the right beats for an origin story, managed to surprise me a little… and left me hoping they’ll make a sequel!

At this point, my respect for fans who haven’t seen Solo requires me to shout “SPOILERS!!!” because I can’t explain why unless I give a few details. So if you haven’t seen it, all you need to know is that I was so ambivalent towards Solo that I planned on maybe seeing the movie when it was free on Netflix but now I want a sequel. As far as I’m concerned, they should just turn the Star Wars franchise over to Ron Howard. Go see it so you can join the conversation. 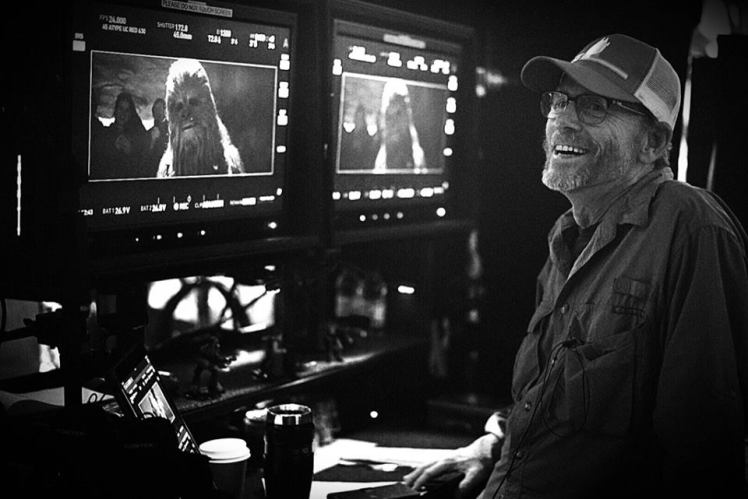 The rest of you know the drill. This is Spoilers Territory.

One of the things I liked about this film was that it recognized the level of fanservice required for a prequel origin story. The term fanservice is typically used in a derisive sense but the fact remains that the people who make successful movies owe much to their fandoms. When you’re writing an origins tale from an established fandom (even if it’s yet another Spider-Man reboot), fans expect consistency with the world that’s already been revealed. We want to see how that world unfolded and the characters in it came to be.

We do expect a few surprises.

Solo delivers. If you want to know how Han Solo got his name, how he met Chewie and Lando, how he became a smuggler, how he got the Millennium Falcon from Lando, and how he became a hotshot pilot who made the Kessel Run in less than 12 parsecs, you won’t be disappointed.

It also shows us a Han who shoots first (perhaps an apology for the notorious edit of the scene between Han and Greedo in Mos Eisley in the 1997 re-release of A New Hope.) Furthermore, in Woody Harrelson’s Beckett, we see a possible reason why Han second guessed his own decision to abandon the Rebels in the last act of A New Hope, leading him to return at the last second to help them destroy the Death Star.

We also get some idea of why Lando is so atrached to the Falcon, even if, well…. ew. Seriously, L3-37 can tell us that works, but how?? And why?? Droids aren’t exactly the sort of robots we’d associate with such things. Unlike the humanoid Cylons of the Battlestar Galactica reboot, Blade Runner’s replicants or Westworld’s Hosts, droids are made of hard, shiny chrome. So how does that even make sense?

If you want welcome surprises, how do you feel about the fact that Jabba the Hutt doesn’t make a physical appearance in this film but Darth Maul does? No, we didn’t get to see how Han got that gangster’s bounty on his head but, yes, we did get a hint at a possible sequel involving Darth Maul AND Jabba the Hutt without having to rely on an end credits scene (There aren’t any, if you’re wondering.)

If you’re wondering how Darth Maul survived being cut in half during The Phantom Menace, you haven’t been watching the Clone Wars animated series. It turns out that Darth Maul saved himself with Sith Anger (short version) and got himself a pair of droid legs. This sets up a very exciting possibility for a sequel, especially if Vader shows up to enforce the Sith Rule of Two and we get a showdown between the Emperor’s Apprentices! That’s right! Darth Vader versus Darth Maul! I will admit that this is a lightsaber battle I’d happily pay to see. 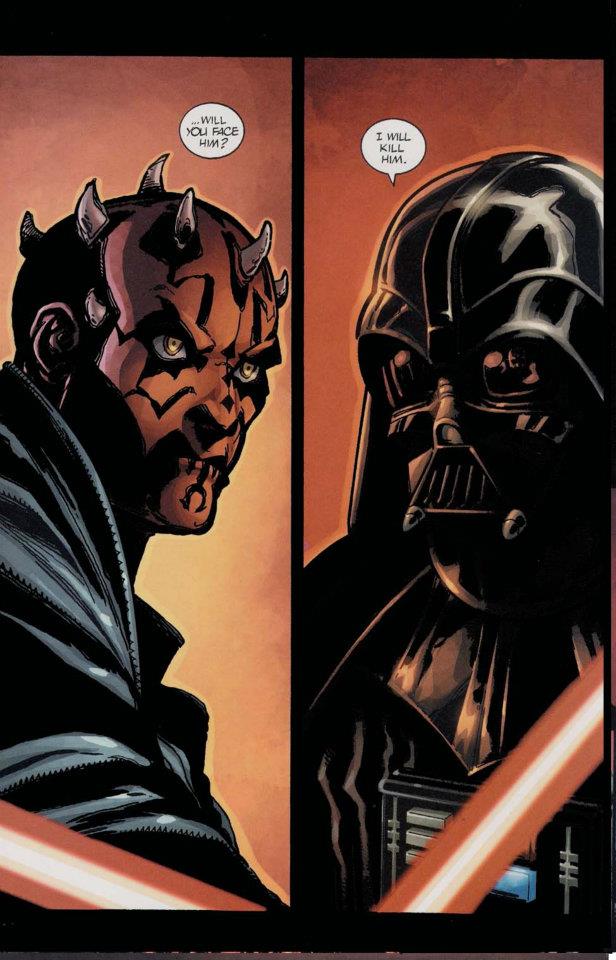 This is not to say Han’s story would take a back seat. His lost love Qi’ra has betrayed him and aligned herself with Darth Maul. There’s also a lot of story to be told between where this movie leaves off and where A New Hope begins. There is even room for Greedo or Boba Fett to make an appearance. Frankly, I don’t see how a sequel won’t be called for at this point.

A part of me doesn’t want to speak too soon. A part of me is afraid to hope. But if a Solo sequel happens the way I kind of see it shaping up to be, combined with Rogue One these three films would make a decent origins prequel for A New Hope. Rogue One was already solid, but when compared to the sequels, it was an anomaly. Solo gives me new hope (pun intended) for better things to come with the completion of the anthology trilogy, or the origins trilogy, or the Star Wars Story (SWS) trilogy, or whatever we end up calling it.

Frankly, I’d had fewer doubts if they’d scrap the intended trilogy from Rian Johnson and just hand the franchise over to Ron Howard. At the very least, give Howard the Solo sequel. 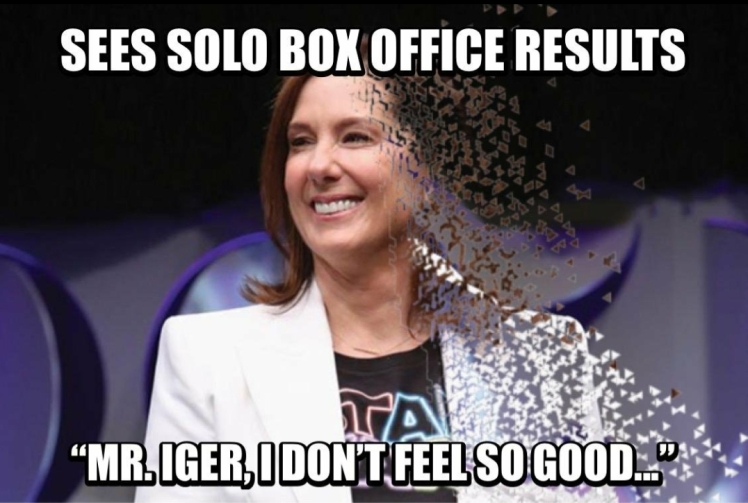 Ironically, Solo‘s box office numbers are poor. Box Office Mojo estimated the film’s production costs at $300 million, yet Solo has only debuted at a little over galf that number with $168 million. It only managed $65 million overseas, including a mere $10 million in China. Its lackluster debut has been blamed on its predictability, franchise fatigue, lingering anger over The Last Jedi, and just bad timimg, period (it’s the only Disney Star Wars film not to open near Christmas).

All we can say at this point regarding a Solo sequel is Good luck and yay the Force be with you.

3 thoughts on “How Solo Could Save Star Wars”